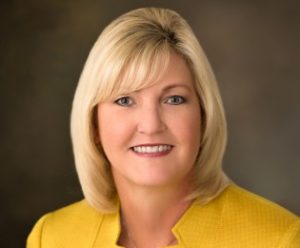 Lori Chillingworth has served as executive vice president of Zions Bank’s Small Business Division since June 2010. She overseas loan approval and management of the bank’s billion dollar portfolio of commercial loans under $750,000, including the US Small Business Administration (SBA) guaranteed loan program. Prior to this position, she was senior vice president and director of business banking.

She has played a key role in Zions Bank’s ranking as the number one SBA 7(a) lender for the past 20 consecutive years in Utah and for the past 12 years in Idaho. She was honored as the 2010 Small Business Financial Services Champion of the Year in SBA’s Region XIII. She was invited to participate in an SBA roundtable with Treasurey Secretary Timothy Geithner in February 2010.

Lori is currently the vice-chair for the Salt Lake Chamber and will be moving to the position of chair in June 2015. She has recently been accepted into the International Women’s Forum Leadership Foundation program for 2014 – 2015.

Lori has been recognized five times in U.S. Banker magazine’s “Most Powerful Women in Banking” issue, ranking twice among its “25 Women to Watch” list. She is a graduate of the Pacific Coast Banking School, and wrote her thesis on “Women, Money and Banking.”