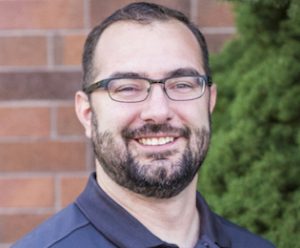 Bryan Scott currently serves as the CEO of Loyal Perch Media, a local newspaper publishing company that currently operates 13 newspapers in the Salt Lake Valley. The City Journals have been published in the area for over 26 years. Since Bryan was named CEO in 2014, he and his team have grown the number of community newspapers from 7 to 13 titles, serving 15 cities and over 200,000 households in the Valley, making Loyal Perch Media one of the largest media companies in the state.

Loyal Perch Media accepted the ElevateHer Challenge in 2017 and soon after Bryan Scott accepted an invitation to sit on the Board, where he is excited to contribute from the perspective of small business. He also feels that being involved in the Women’s Leadership Institute, will bring experience and specific knowledge that will allow his company to grow and become stronger.

Loyal Perch Media are currently partners with 11 Chambers of Commerce, where they actively promote economic development and small business growth in the area. Bryan and the City Journals have won numerous awards from the Society of Professional Journalism and Utah Press Association. City Journals have also won numerous other awards such as 2016 Knights of Heroes Large Business of the Year and 2015 South Jordan Small Business of the year.

Bryan can be reached at Bryan@Mycityjournals.com and works from Loyal Perch Media’s corporate office in Sandy, Utah.