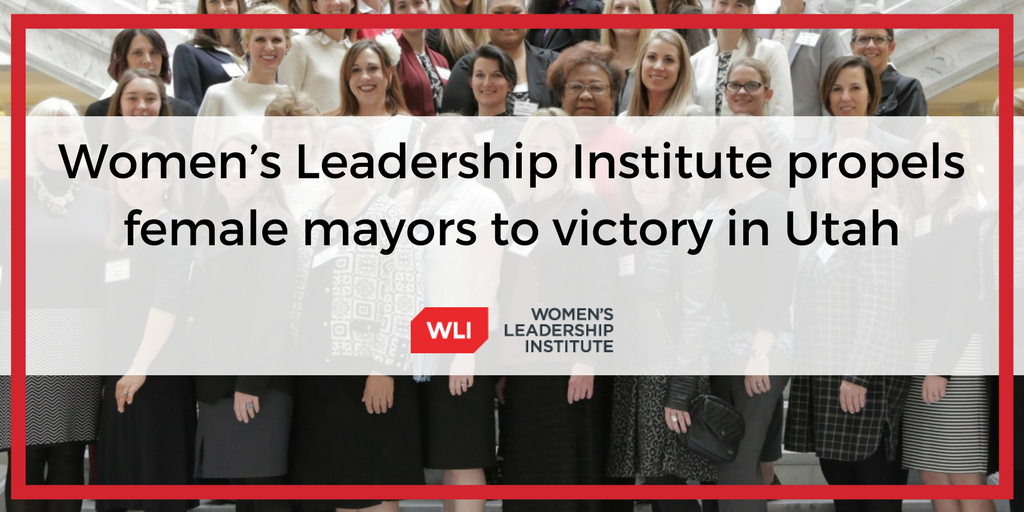 “Public policy is more innovative and collaborative when a critical mass of women have a place at the committee table,” said Patricia Jones, CEO of WLI, who also served as a state senator. “In just three years, the Women’s Leadership Institute will have trained over 100 women to step up and run for political office. You will see more women running for political office now and the very near future.”

The four new mayors are Holly Daines of Logan, Kelleen Potter of Heber City, Katie Witt of Kaysville, and Michelle Kaufusi of Provo. Kaufusi is the first woman to serve as mayor of Provo since the city’s founding in 1849.

“I am honored to be the first female mayor for the beautiful city of Provo; the glass ceiling has been shattered,” Kaufusi said. “Because of the Women’s Leadership Institute, when I began this journey I was prepared for the entire year of work it took. I was able to learn and strategize many campaign ideas due to the amazing speakers that were brought in, as well as from my other classmates. I want my time in office to be about all of us in Provo coming together for the greater good of our incredible city.”

In Kaysville, Witt won her mayoral race with 53.5 percent of the vote, narrowly beating out Lorene Kamalu – another Political Development Series graduate from the same 2015 class. “The Women’s Leadership Institute is a great organization to network with women who want to be impactful in their community,” said Witt. “Getting to know so many women working towards making life better was inspiring. Running against a friend made this a strenuous campaign. Although we would bring different attributes to the Mayor’s Office, we share a strong commitment and dedication to Kaysville.”

Heber City Council Member Kelleen Potter beat the incumbent Heber City Mayor, Alan W. McDonald with 58.6 percent of the vote. Although Potter was already serving on the city council, she says the Political Development Series was key to her decision in running for mayor.

“Being in a course full of intelligent, passionate women who are committed to public service and being instructed by knowledgeable professionals, gave me the confidence to overcome my doubts and move forward with my political goals,” said Potter.

Daines was elected as Logan’s newest Mayor after serving two terms as a city councilwoman. Daines believes the advice and encouragement she received in the Political Development Series helped her reach her political goal.

“Thanks to the Women’s Leadership Institute for their good work towards ensuring we have more women’s voices represented in government,” said Daines. I’m honored to be one of those voices.”

The Women’s Leadership Institute began its bipartisan Political Development Series in the fall of 2015. Women enrolled participate in a six-month series of classes, once a month, designed to train candidates in all aspects of a political campaign from finance to social media. In the two years since the inaugural class, the Women’s Leadership Institute will have graduated over 120 women.

There are currently 51 women enrolled in the Political Development Series this fall with the next class opening in September of 2018. Registration and additional information are available at www.WLIUT.com.

The Women’s Leadership Institute was founded in 2015 under the direction of CEO Patricia Jones. Its mission is to elevate the stature of women’s leadership in Utah in both business and politics. WLI also started the Political Development Series in 2015.