Last week WLI facilitated two breakout sessions on Gender Pay Equality for P3 Utah‘s 8th Annual 2018 Sustainability Conference, challenging entrepreneurs to build a more sustainable business. In each session, WLI offered five best practices businesses can practice for gender pay equality. And then, through a detailed discussion, participants in each session added ideas of their own to that list of best practices.

According to the U.S. Bureau of Labor Statistics (BLS), in the first quarter of 2018, full-time female employees earned only 81.1 percent of what full-time male employees earned. There is debate about the gender pay gap. Some research indicates that a very small portion of the gender wage gap is attributed to paying women less than men for doing the same work. Some scholarly research indicates the gender wage gap occurs because women tend to work in lower-paying jobs, and men tend to work in higher-paying jobs.

Regardless of the sides of the debate, we know there is a gender pay gap. And we can begin to close this gap when businesses decided to monitor pay by gender.  Here are five best practices companies can implement to begin monitoring that gap:

Through our work with the ElevateHER Challenge, we know it takes committed men and women in senior leadership to instigate the change Utah needs to elevate women and, likewise, monitor pay by gender. Though recent national studies rank Utah at the bottom of the list for women’s equality, our experience shows differently. Since 2015 we are working with over 250 organizations and businesses that do want to create change in Utah and are making changes in their organization to move the needle. It’s not enough, but it’s a great start. And it always starts with invested senior leaders.

Pay secrecy is considered illegal under Section 7 of the federal National Labor Relations Act (which protects non-supervisory employees from employer retaliation if they choose to discuss wages with colleagues). However, a 2010 survey found that 66 percent of private-sector workers and 15 percent of public-sector workers were either formally or informally prohibited by their employers from discussing pay with colleagues. (Institute for Women’s Policy Research, 2017)

It’s also possible that social norms in Utah, even in the United States, may hold employees back from asking about the earnings of co-workers.  But more to the point, employers may encourage a company culture of pay secrecy by discouraging wage sharing, or handing out paychecks in private. Without open conversations about earnings, women may not even know they are making less than their male counterparts.

It is common practice to ask a potential employee (both male and female) their previous salary history, either through an application or during an interview. This previous salary history is then considered when offering a new employee a job offer. Since women tend to earn less in nearly all occupations in comparison to men, the practice of being asked to disclose previous salary can compound inequalities and follow a woman over the course of her career. (IRLE, State Policy Strategies for Narrowing the Gender Wage Gap, Berkeley University of California, 2018)

Companies can start by avoiding asking job candidates for salary history. Starbucks is an example of one company which has adopted this principle in it’s Pay Equity Principles and Best Practices, “we do not ask candidates about their salary history. Starting pay should be based on the candidate’s skills, abilities and experience, not on a prior salary from another employer.”

Does your business have a gender pay gap? We can’t make improvements without a baseline. The first step to monitor pay by gender is to conduct an internal audit and determine what your company’s pay discrepancies look like and make a long-term plan to improve them.

“Performance is the biggest variable. If two people are meeting the expectations of the role and have been at the company the same time, they should be paid the same thing,” Angela Guy, head of Diversity & Inclusion at L’Oreal USA told Diversity Best Practices. L’Oreal USA was one of over 100 companies that signed the White House Equal Pay Pledge during the Obama administration.

Businesses and organizations can have clear metrics on what defines good job performance. Pay raises can be gender-neutral, offered on comparable skills and roles and not on what an individual may or may not say they want. 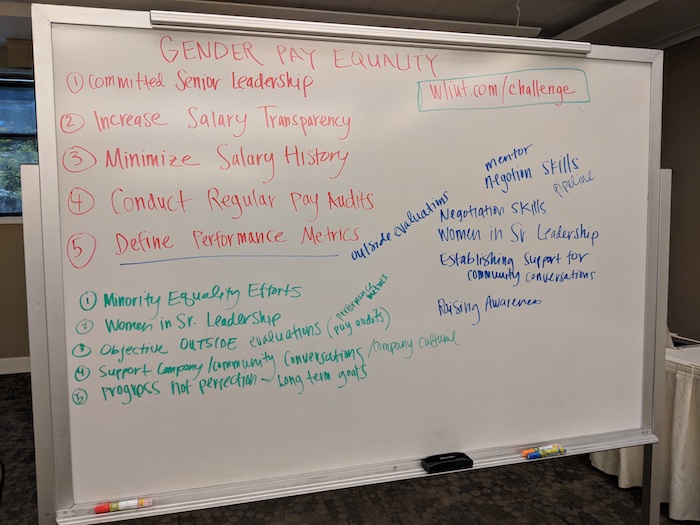 As the P3 Conference participants in each session discussed these five best practices, they expanded on them. As a group they discussed additional best practices that may be beneficial to a company or organization.

Here are two of the suggestions they add to our previous list:

One gentleman in our first session shared a story about a previous job he held. At this job, Jeff sat next to a female counterpart who had been with the company about the same amount of time as he had and she held the same job he did and did it well. One day the two of them ended up discussing how much money they made and the female employee was shocked to find out Jeff made $4,000 more than she did. When she asked him why, Jeff responded, “because I asked for it when they hired me. I needed more money.”

In this real-life example, Jeff’s female co-worker did talk to her supervisor about the pay discrepancy and her supervisor put into place a plan to raise her salary, matching it to Jeff’s.

We could – and should – write an entirely different article on why women need improved negotiation skills. But in reference to the gender pay gap, it’s clear that the ability to negotiate a salary has an impact. We also know cultural biases privilege men in negotiations.

Laura Kray, Professor at UC Berkeley’s Haas School of Business, studies the role of gender in negotiations. Women who act assertively and display “masculine” traits during negotiations may be viewed unfavorable by employers who perceive such qualities as too aggressive – even if these same qualities benefit men in discussions about pay. As a result, women are often more apprehensive about the negotiation process than men, may feel they don’t know how to negotiate, and settle for lower wages. Negotiation trainings for female employees could go along way to solve these problems.

At the Women’s Leadership Institute we know first-hand the value women in senior leadership bring to a company’s ROI, but also their company morale and even their efforts to add more women to their pipeline. This is why it was interesting in our discussion about gender pay equality, participants in BOTH sessions quickly came to their own conclusions that having more women in senior leadership would, from their perspective, be the fastest way to solve the gender gap problem.

The theory behind their thinking was women are more eager to work for companies where they can already see women succeeding.  And if companies can get more women to apply for jobs, and offer women the same pay as men from the beginning of the hiring process, this can over time narrow the gender pay gap. Also, if women at mid-level can see successful women at senior levels, this will have an encouraging effect on women moving up within a company, and with it their salaries will increase.

We at WLI absolutely agree.

In partnership with the Salt Lake Chamber